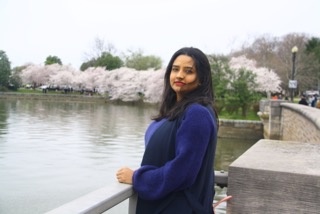 Biography: Dr. Bhattacharjee did her B.Sc in Biotechnology from Bangalore Univers ReadMore...

Dr. Bhattacharjee did her B.Sc in Biotechnology from Bangalore University in 2006 and M.Sc in Applied Genetics from Bangalore University in 2008. She then moved to England to pursue her DPhil (Phd) in Biochemistry from Oxford University where she studied the role of Fml1 and its partner proteins Mhf1 and Mhf2 in promoting genome stability. She was awarded her DPhil in 2012. During her time at Oxford, she was also a tutor at Greene’s College, Oxford. In 2013, Dr. Bhattacharjee moved to Cold Spring Harbor Laboratory, New York. At CSHL, her work has focused on understanding the epigenetic regulation of DNA repair. She is also an academic tutor at the Watson School of Biological studies, the school for graduate studies at CSHL.

Biography: After graduating from the Realgymnasium Wels (1966), Beate Wimmer-Puch ReadMore...

After graduating from the Realgymnasium Wels (1966), Beate Wimmer-Puchinger studied psychology at the University of Vienna, where she earned her doctorate in 1974. In 1976 she became a university assistant at the Institute of Depth Psychology and Psychotherapy. From 1979 to 1980 she was a scientific assistant at the Ludwig Boltzmann Institute for Birth Control and Pregnancy Care at the Semmelweis Women's Hospital . There she set up a comprehensive clinical-psychological care model. Already with one of her first research on the motives for abortion, the psychologist sparked heated discussions. In 1985, Beate Wimmer-Puchinger habilitated at the University of Vienna. From 1989 to 1992 she was chairman of the clinical psychologists in the professional association for psychologists. In 1993, the University of Salzburg awarded her the title of Associate Professor. In 1994, she became WHO Country Coordinator for Women's Health. In 1996 she was elected Study Director of European "Parent Support" by the Council of Europe. In 1996, the psychologist created the first Vienna Women's Health Report, which resulted in the Vienna Women's Health Program. In 1999, Wimmer-Puchinger became the city's women's health officer to implement the program. She remained in this role until 2015. Her research and education activities included topics such as eating disorders, medial beauty ideals and "grocery" beauty surgery, postnatal depression, breast cancer screening, violence against women, female genital mutilation, health promotion for socially disadvantaged women or training for hospital staff for early detection of domestic disorders Violence. Teaching assignments have taken her to Berlin, the USA and Switzerland, among others. As a pioneer of women's health promotion, the psychologist has received several awards. Among other awards, she received the Golden Medal of Merit for the Province of Vienna in 2010, the Golden Medal for Services to the Republic of Austria in 2011 and the Women's Prize of the City of Vienna in 2016. In 2017, Beate Wimmer-Puchinger was elected President of the Professional Association of Austrian Psychologists (BÖP).

Professor Dov Feldberg Graduated from the Hebrew University Medical School, Jerusalem. He has Completed residency in OB/GYN at the Rabin medical center, He completed a fellowship in the field of IVF at the Yale-New Haven University Hospital, USA, In 1991 he got a fellowship in IVF innovations at the Cornell New-York Hospital, Center For Reproductive Medicine, USA, Fellowship at the Department of Obstetrics and Gynecology and Reproductive Medicine, Antoine Béclère Hospital and Paris University XI, National Institute of Health and Medical Research, Clamart, France, Fellowship at the Würzburg In-Vitro Fertilization (IVF) Unit, Erlangen University, Nuremberg, Germany & fellowship and specialization under Prof. W. Feichtinger at the IVF Unit, Vienna, Austria. In 1985, after completing his residency and a fellowship abroad, professor Feldberg was appointed head of the IVF unit at Rabin Medical Center. In 2001 professor Feldberg was appointed deputy chief of the Helen Shneider women’s hospital at the Rabin Medical Complex. He privately practices as a leading IVF specialist at the Herzliya Medical Center. Professor Feldberg has vast experience in IVF procedures using the IMSI technique in cases of male infertility. For many years he has been working closely with prof. Bartov (the mind behind the method) making him the best expert in the field worldwide. Professor Feldberg has traveled around the world passing on his knowledge and helping other clinics perfect their expertise in the field of IVF. Professor Feldberg has tight connections to infertility centers in USA, Italy, Lithuania, Russia, Kazakhstan and more.

Gynecology and Obstetrics, Male and female infertility treatment,IVF, including all the latest developments and advancements in the field: TESA/TESE, ICSI, IMSI, PGD

Biography: She received his undergraduate degree in Psychology in 1979. This is a ReadMore...

Bachelor's degree in Nursing, a Master's degree in Social Sciences - (1996); Doctorate in Education - (2004); postdoctoral degree in Education (2013). Professor of the undergraduate course in Obstetrics and of the Post-Graduation Program in Cultural Studies of the School of Arts, Sciences and Humanities of the University of São Paulo. Leader of the International and Interdisciplinary Group of Studies and Research in Training of Professionals for Education and Health. Topics of interest: Health professional training. Teacher training. Information-communication in health services. Accessibility of health services. Management of health services.

Assistant professor Vislava Globevnik Velikonja has been working in the field of psychology and psychopathology of the reproductive period for three decades. She is employed at the University Medical Centre Ljubljana’s Division of Gynaecology and Obstetrics as a specialist in clinical psychology. After completing her undergraduate studies of psychology at the Faculty of Arts in Ljubljana in 1987, she completed her specialisation in clinical psychology at the Medical Faculty in Ljubljana in 1993. As a junior researcher she was involved in research work and in 1994 finished her doctorate at the University of Ljubljana in the field of a preventive program for reducing consequences of premature birth for prematurely born babies and their parents at the Neonate Intensive Care Unit. In 1994 she completed a 4-year training program in Experiental Family Therapy and in 2008 the Masterclass Gestalt Experiental Psychotherapy at the Kempler Institute in the Netherlands. In addition to her clinical work, where she expands the field of healthcare psychology to the field of gynaecology and obstetrics in Slovenia, she is also active in the research and pedagogical field. She was first elected to the title of an assistant professor in 1996. As a lecturer and mentor she is also involved in pedagogical work for students of psychology, medicine, nursing and midwifery, and trainee in clinical psychology, gynaecology and obstetrics, and paediatrics. She presents her research and professional work at home and abroad at international conferences and congresses. She is the representative of Slovenia in ISPOG - International Society for Psychosomatic Obstetrics and Gynaecology, and is active in various professional associations and was repeatedly elected to the Committee for Medical Ethics at the University Medical Centre Ljubljana, has already been an appointed member of the State Professional Board of Clinical Psychology at the Ministry of Health of the Republic of Slovenia, a member of the Management Board of the Chamber of Clinical Psychologists and the first President of the Slovenian Society for Psychosomatics in Gynaecology and a member of the Management Board of the Institute for Family Therapy. She was the co-founder of the Society for the Help of Prematurely Born Children and its first president. She started a nationwide movement to humanize the procedures that accompany perinatal deaths, education of the professional and lay public and improving professional help for grieving parents. She is currently in charge of introducing screening for depression, addiction, and violence against women in the perinatal period in Slovenia and is involved in the education of a network of psychologists and psychiatrists in Slovenia for a better-quality treatment of women with mental disorders in the perinatal period.